Would you like to switch to the accessible version of this site?

Don't need the accessible version of this site?

On behalf of the staff at Spring Valley Animal Hospital, we are honored to pay respect to our beloved animal friends who have passed. We also welcome you to create a lasting tribute for your beloved pet or animal friend on our website's Pet Memorial page. Please feel free to complete the following Pet Memorial Form in Adobe Acrobat format, which requires the free Acrobat Reader to view. 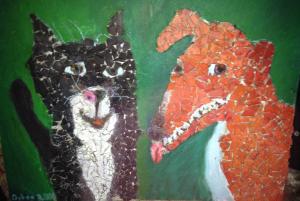 Charlie was a thin orange carrot, with white paws, a skein of black fur on his tail and a phobia of most things great and small. At least that was the skittish dog that my mom and I drove past every day in the fall of 2003. When we saw that his life was in danger, we finally rescued him from his abusive home and took him home to ours. But for awhile it seemed that his life was permanently damaged. With his long speckled snout, he flipped over the dog food dishes that we laid out for him. He found shelter in dark corners. He refused to be pried from his bed and did not answer to his name. And he ran away so often that the search for Charlie became an almost weekly ritual in our neighborhood.

But that was not the dog that left us for good on Wed. May 23, 2016. The dog that I remember best, pulled me and my mom in a sled down my neighbor's snow covered hill, stopping to eat the snow along the way. He barrelled down the stairs to my dad's bedroom, when I gave my dad a hug in the morning, refusing to stop barking until he was properly included in the hug. And he slept peacefully next to our beloved Gonzales, who died last year and is also pictured in this mosaic.

Charlie became much more than a pet to us. He was part of the family. He was someone to talk to and someone to learn from. He was the inspiration for countless stories, songs and works of art. He was the mythical guardian of our house against bears and burglars alike. As we watched his back legs weaken and his health decline over the past year, we(my mom especially), did everything we could to keep him alive and happy. It never felt unreasonable, considering all the life and happiness that he gave to us. 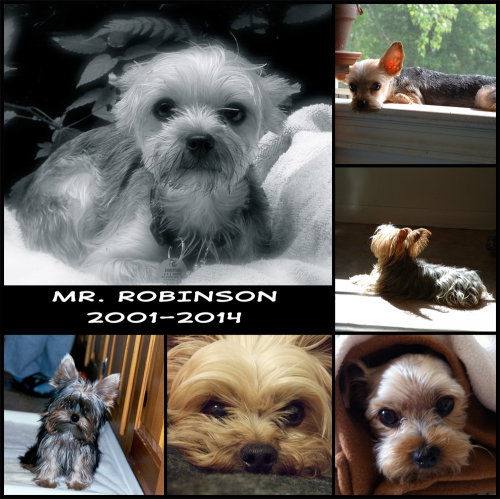 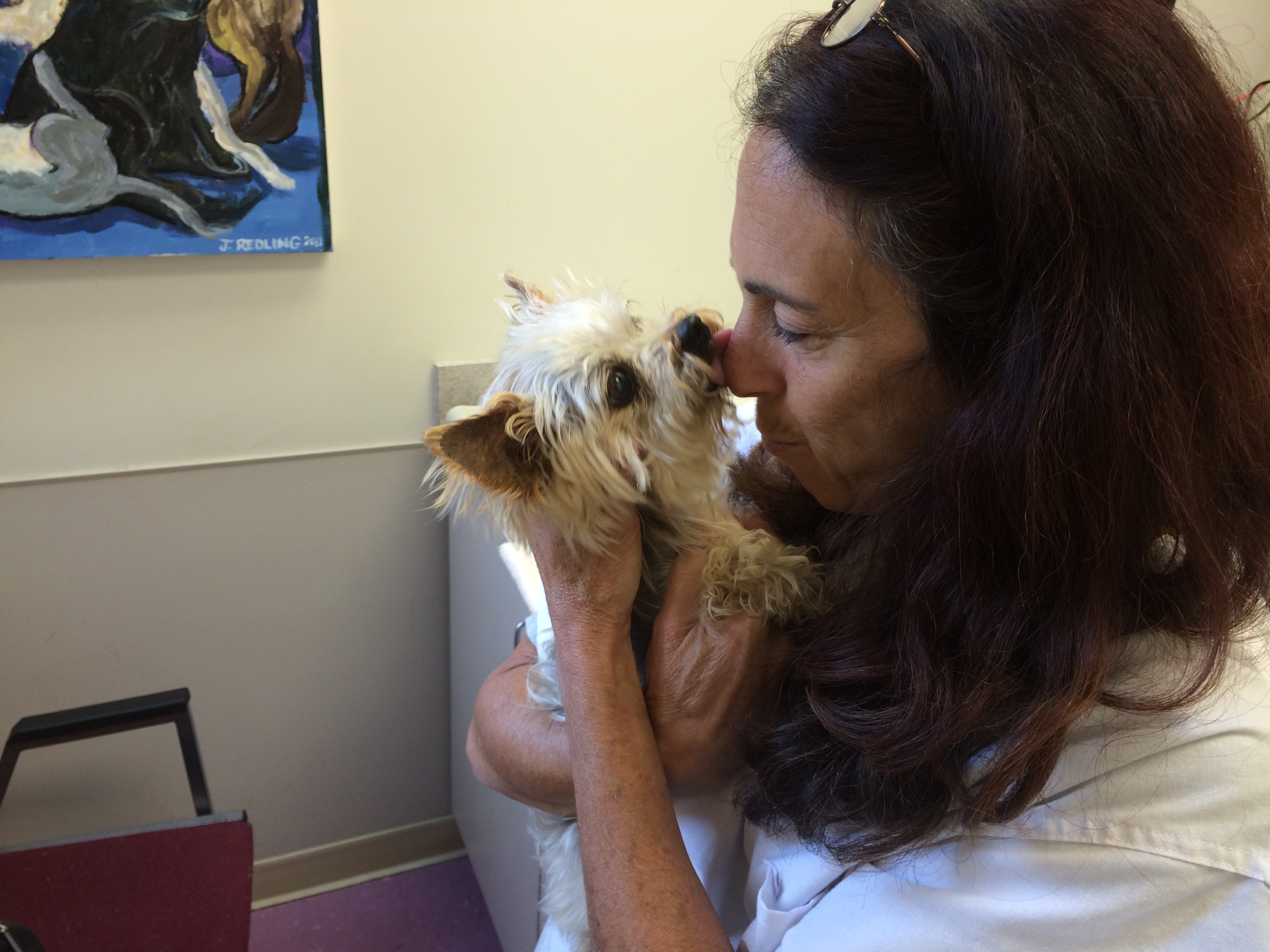 Such a beautiful collage of such a wonderful dog!(and wonderful parents-the Orban's) 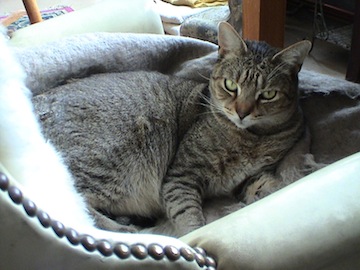 After a number of heroic gestures .By those who loved him best. We said goodbye to Waldo today. Prince of cats! Those who knew him would agree...

We brought him home to Hungry Hollow and by kerosene lantern became midnight grave diggers. We made him a bed in his favorite hunting, groundmarked with a regal circle of stones

He had a long and splendid life. He beat all the odds. He was a magnificent beast. How lucky we were to have him!

Sam was adopted from the Cat Care Clinic 10 years ago. Eric just let us know that he passed away from brain cancer in Dec. 2013. We are sorry for his loss.

This morning our most treasurer little soul, Sunny (The Bunny Bear), passed away from a heart attack in our arms a few weeks short of his 15th birthday.

Last Wednesday Sunny woke unable to walk as he was struggling with end stage renal failure and the toxins in his body were now causing extreme muscle weakness.

He had been on Sub Q fluids for the last few months. We had been told in January his kidneys were shutting down and it was just a matter of time and then in April he began to get daily fluids to support his kidney function.

Sunny was a real fighter for such a little fellow. We hoped he would actually pull through one more time, as last June he had lost 75% of his liver function, but thanks to nutritional support and our wonderful vet we were able to get him over that hump and he regained 100% of his liver function, giving us another year together.

So Wednesday we brought him home and hoped with round the clock care he might pull out at least for a while longer.

This morning he was more alert than he had been all week and even had a bit of 'fight in him' - then while being cleaned up from his morning meal he had a heart attack and passed with David and I holding him.

His brother, 14 year Dante (who was also recently very ill, but has been thankfully strong and on the mend) was also in the room and had the chance to sit with Sunny for a bit before we set him to rest with the other members of our feline family that had passed on before.

Sunny was a unique soft fellow who loved to 'give paw'. We were once told by a Japanese business man that he was a true "Lucky Cat" capable of bringing joy and prosperity to those with whom he chose to share his paw and that he should be prized - something we tried to do on a daily basis. He was a constant reminder of how blessed our lives are.

So attached is a"little paw" from Sunny and a favorite portrait.

While it feels empty now, our house will always be full because of the joy he brought our lives.

Thank you to our family and friends for listening to our many Sunny (and Dante) tales - as to us they are not just pets but members of our family.

Missing the boy,
Sue and David 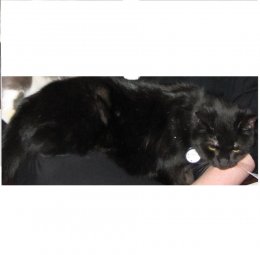 Skye was my first cat. When I went to the SPCA just to "look" at the cats in 1997, she chose me as soon as I chose her...she immediately starting purring as soon as they placed her in my arms. I just knew she was coming home with me. She has moved with me 5 different times. She has been with me through a huge portion of my life's major events-from grad school, getting married, infertility, buying and renovating a new house, finally getting pregnant and having two baby boys in less than two years and then turning 40. I was so devastated when she was diagnosed with chronic renal failure at age 16. Dr. Saunders was awesome and "fixed her up" so she could come home with me and we were able to spend another couple of months saying a long goodbye to each other. In the end, Skye told me when it was time to go. I believe that Skye waited to make sure I was okay after having my second baby before she decided it was time to leave and go on to her next life. I really hope this next life is somewhere that she can be carefree and lay and bask in the sunshine and purr all she wants, because she deserves nothing less. She was sincerely one of the sweetest cats you could ever hope to meet. She also had one of the softest and shiniest coats of black fur with just a few strands of white fur just below her neck. She wasn't "short-haired" or "long-haired", more like "medium-haired" if there is even a classification for that(THERE IS!) My heart is broken and I miss her more than words can say. I really hope that I will be reunited again with her one day. RIP sweet Skyekitty Bassette.

They say memories are golden

well maybe that is true.

I only wanted you.

A million times I needed you,

a million times I cried.

If love alone could have saved you

you never would have died.

In life I loved you dearly,

In death I love you still.

In my heart you hold a place

no one could ever fill.

If tears could build a stairway

and heartache make a lane,

I'd walk the path to heaven

and bring you back again.

Our family chain is broken,

and nothing seems the same.

But as G-d calls us one by one,

the chain will link again. 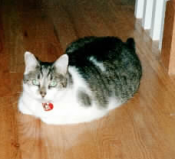 She was almost 17 years old when we had to say good-bye, but we never ever wanted to let her go. She was our first kitty, our beloved Gypsy.

She came to our house when she was about five and hid behind our bed until she decided to get to know us. As time went by, she gradually charmed us as her own, greeting us at the door when we returned from work, visiting us during the night and sleeping on us, warming our laps whenever she desired: sampling our dinners and becoming the goodwill ambassador of our home by welcoming our guests.

A quiet but comforting presence, her cancer diagnosis took us completely by surprise. We rejoiced as she responded well to treatment and were crushed when the cancer overcame her.

We miss her dearly, and always will, our beautiful little girl.

I have not really been able to focus this week. Never dreamed that Rosie, the pooch I thought I wanted to give away would find such a large place in my heart but I am so thankful for that.

I realize how lucky we both have been to have 2 vets pulling for her. I am certain that her life and the qualiity of her life was improved with the collaboration between you and Dr Palma.

I so appreciate your ear, your good and heartful advice and the knowledge that you were there and really cared for her and me!!!

I love recommending SVAH because I know that without your early diagnosis and great care and concern Rosie might not have lasted this long. I know I did the right thing. She was suffering because her life was changing and because out of any 10 days she was in the hospital for 3. She is in a better place and I am a better person for having her, keeping her and learning patience from her.

The toughest part is that just last week on a good day I told her as I wrote a check to Care Credit that she had to stay around long enough for all her piercings and shavings to heal!!

Thanks for your care and patience. I know I must get another pooch, probably another Dobie rescue but there will never be another Rosie!!

Find us on the map

Read What Our Clients Say